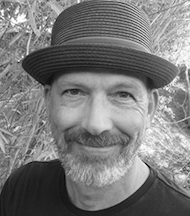 Volker Janssen specializes in the history of California, American prisons and rehabilitation programs in the mid-twentieth century, the American economy, and cultures of technology. He has published essays on the history of incarceration in the Journal of American History, the history of science journal Osiris, in Darren Dochuk’s and Michelle Nickerson’s Sunbelt Rising: The Politics of Space, Place, and Region, as well as Rob Chase’s Caging Borders and Carceral States. His book on the emergence of California’s Department of Corrections with Oxford University Press has long been in the making and will be completed in 2020. His edited volume Where Minds and Matters Meet explores the ways in which Western and California history and culture shaped 20th century technological developments, and his “A Tale of two Crises” in Sheila Collins’s and Gertrude Schaffner Goldberg’s When Government Helped compares the American economy of the 1920s with the eve of the Great Recession.

Volker Janssen has also written peer-reviewed study texts on the Great Depression and the Sixties for the Academic Decathlon – a national high-school academic competition, is also an irregular contributor to the popular history site history.com

. Janssen is a strong advocate of internships in history education, loves to help students figure out original career paths with their degrees and remains deeply involved in the improvement of graduate education on campus.

Janssen is an enthusiastic advocate of High-Impact Practices in higher-ed. That’s why he pushes diverse teamwork projects in his classroom and irregularly teaches the study abroad program in Berlin, Germany, and the DC Scholars program in the nation’s capital.

Though always passionate about history, Volker Janssen did not set out for higher education right away. Born near Frankfurt, Germany, he first dabbled into stand-up comedy and music before going abroad to work on engineering projects in London and Belize, Central America for a few years. He then worked as a newspaper editor for a small German-language newspaper in New York City before returning to Germany to attend Hamburg University and work as a reporter for the NDR, a branch of Germany’s National Public Radio. A Fulbright scholarship brought him UC San Diego in 1999, where he got hooked on archival research and decided to pursue an academic career rather than work as a journalist.

When Volker Janssen is not working, he spends time with his wife and two children, working his garden, baking bread, and recovering his guitar-skills.

Postdoctoral Fellow at the Huntington-University of Southern California Institute on California and the West (I.C.W.)

Ph.D. Graduate Student in the Department of History at the University of California, San Diego.

Volker Janssen’s current research interest focuses on a seemingly mundane technology - buses in mid-twentieth century America. For students of suburban America today, some of the key stories of the civil rights movement take place in that alien setting, the bus.  Think, Rosa Parks refused to sit in the back of one, the Freedom Riders risked their lives to mix on them in the South, and white mobs from Boston to Charlottesville attacked them when they brought black students to their local schools.  There, on the narrow aisles of a public transport, activists challenged segregation and discrimination. Was it just a coincidence that this happened on busses? Could Rosa Parks have sparked a boycott on a TWA flight, would the Freedom Riders have fit on an Ueber? Busses, Janssen proposes, were a specific form of transportation that did not just create the setting for protest but were the very public institution activists fought for. Janssen wants to put public transportation – the bus – at the center of the mid-twentieth century civil rights movement and thus recast our understanding the nation’s contemporary civil rights issues: By contrast, today’s car-services and individual transportation impoverish our communities aesthetically, environmentally, and economically, but also abandon a crucial space where an “American public” was made.