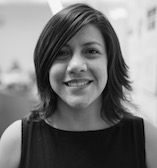 Raised in Santa Ana, California, a primarily Mexican-American community, Mariana Bruno developed a strong cultural identity. These experiences encouraged her to pursue a degree in public history. In the spring of 2017, Mariana collaborated on a multi-media installation and interdisciplinary project, SanTana’s Fairy Tales, coordinated by Sarah Rafael García.

Mariana interpreted six fairy tales written by García and presented historical evidence to support the stories’ community-based narratives. Images of the primary sources were displayed on tablets at the SanTana’s Fairy Tales exhibition at the CSUF Grand Central Art Center.